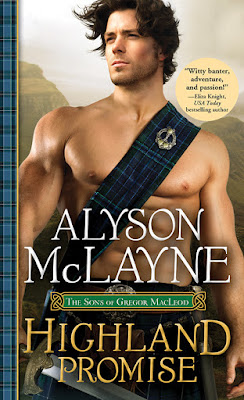 Five boys destined to become Highland lairds are fostered together as brothers. Darach, Lachlan, Callum, Gavin and Kerr fight for their clans, for each other, and for their own true loves.

When forced to choose between duty and honor…
Darach MacKenzie vowed never again to let a woman near his heart after his betrothed betrayed him. It sparked an intense feud between his clan and the Frasers. With all-out war on the wind, Darach can’t be distracted—not even by a sweet and charming lass who desperately needs his help.

This Highland Laird will find a way to have both
When Darach rescued Caitlin MacInnes from the clutches of vile Laird Fraser, she vowed to never let men or misery rule her life again. With Darach and the MacKenzie clan, Caitlin finally feels safe. But when Laird Fraser shows up to claim what’s rightfully his, or go to war, Darach will have to use all his brawn and brains to protect Caitlin—even if it means losing his heart.

A stay-at-home mom of twins and award-winning writer, Alyson McLayne is a dog lover and cat servant with a serious stash of dark chocolate. After getting her degree in theater at the University of Alberta, she promptly moved to the west coast where she worked in film for several years and met her Prop Master husband. Website | Twitter | Facebook 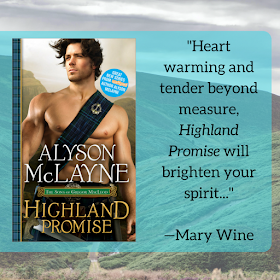 “I’ll not be marrying the lass, Oslow, but if I did, she’d more than likely give me daughters. All of them looking like her, causing trouble. I’d be an old man in my grave before I was forty.”
“Nay. She’d give you sons. Braw lads as strong-minded and fearless as her. But if you’re not interested in the lass, I’ll introduce her to my Angus. He needs a wife, and I’m sure he’d be as smitten with her as Gare and Brodie.”
The blood heated in Darach’s veins, flushing his face. He looked toward the field, trying to make out what Caitlin and the two younger men were doing. Naught of consequence. Just playing with the kittens.
Playing with the kittens—like hell. Brodie was a right rogue with the lasses, and Gare was such a pitiful lad, caught betwixt man and boy, she’d want to save him just like she’d saved the baby bird. Most likely he’d try to make himself look as pathetic as possible with the hopes of ensnaring her, the devil.
Darach stood abruptly and made his way across the rocky shore to the field. Lachlan’s snort followed him. Sure enough, Gare and Brodie sat beside her, hanging on to every word. Scoundrels, both of them. He frowned, and they jumped to their feet. Let Caitlin see who was master and laird here—the most dominant MacKenzie male.
After sending them to Oslow, he sat on the grass beside her. She looked pleased to see him. Maybe now would be the time to tell her the kittens were going to the miller’s. He willed himself to begin, but one of the cats tumbled into his lap and mewed up at him. Bloody fiend.
“Och, would you look at that. He loves you, Darach. Maybe he will be called Justice, for he is drawn to you and you are the most just man I know.”
He puffed up and deflated at the same time. ’Twas a good decision to send the cats to the miller. Not only did it show Justice, but also Prudence, Fortitude, and Temperance. Surely she would see the right of it.
The kit ran up his body and batted his hair. Darach started in surprise. Grabbing it, he held the wee thing in front of him. The cat reached out and swatted his chin.
Caitlin fell sideways onto the grass, laughing. “You’ve ne’er had a cat before, have you?”
Darach grunted and brought the kitten closer. He had to admit it was sweet—big eyes and downy, soft fur. It suckled the stubble of his beard, and his heart turned over.
“They’re starved, poor babies,” she said. “He’s trying to nurse. All we had was water. It helped, but their bellies are empty.”
There would be lots of milk at the miller’s.
“Caitlin, I doona think…”
She gazed at him, her eyes wide, trusting. A happy glow surrounded her, and the words stuck in his throat. Maybe she could keep the kits ’til they were old enough to be on their own. House them in the kitchens and out of his sight and the sight of his dogs for a week or two. Then they could go to the miller.
“Aye, Darach?”
“’Tis naught, lass. We’ll be home soon and they can have their meal.”
Picking up a kitten, she held it close. “I think this little lass will be Temperance, for she’s the only female and needs to have much restraint to live with three brothers. It must be a trial, doona you think?”
“I lived with four brothers, and aye, ’twas a trial.”
A wistful look crossed her face. “I did so wish for a brother. Or a sister. But my parents were not blessed with bairns after me. Instead, I had lots of pets—cats, dogs, horses, and pigs.”
“Pigs?”
“Aye, pigs are wonderful pets. Although I caused such a fankle when my father wanted to butcher the dear thing, I was ne’er allowed to bond with a pig again.”
“And what happened to it?”
“I doona know. I lost more than just my parents the night of the fire. Verily, ’twas a torment. I longed for pets after that, but I feared to show favor to any creature, lest my uncle hurt the animal. I was verra careful when I fed Cloud apples. The guards who followed me knew, I’m sure, but one older guard in particular didn’t mind.” She turned to smile at the stallion tethered with the other horses. “I’m thankful you saved him too.”
His stomach soured at the insight into her life after her parents’ death, at how afraid, alone and sad she must have been. Yet she’d shown none of that to him or his men. And he knew she must have felt it—her heart was as big as the loch.
“I want you to have, Cloud,” he said suddenly. It was the least he could do.
Her eyes grew round. “Truly?”
“Aye. But wait to ride him until we return to the keep. I doona want him to spook and throw you out here. Let him get used to you in the stables first, aye?” Where he could have a healer on hand and spread out some hay to soften her fall.
With an excited holler, she threw her arms around his neck and almost knocked him backward. One arm settled around her waist, the other hovered just above her hair. The devil take him, he wanted to touch her, to hold her still for his kiss.

My name is Alyson McLayne, and I can’t tell you how excited I am to introduce you to my book, HIGHLAND PROMISE, a Scottish Highlander Romantic Adventure!

It’s the first book in my historical romance series, THE SONS OF GREGOR MACLEOD, starring five Highland Lairds, who were fostered together as lads to become brothers. Darach, Lachlan, Callum, Gavin, and Kerr fight for their clans, for each other, and for their own true love.

These Highland Lairds are a band of brothers, who will defend each other to the death—if they don’t kill each other first with their sharp wit and hilarious banter. They take their oaths seriously, whether it’s to bring peace to the Highlands and defend one another as friends and allies, or to razz each other so hard, only one brother is left standing—and then they’ll take him down too.

And the women they love? They have spirit, and tenacity, and they take care of others before they take care of themselves. They’re all different—their backgrounds, their struggles, their interests and talents—but at the core of each woman is a strength, compassion, and a capacity to love that brings their man to his knees.

Before I tell you about HIGHLAND PROMISE, here’s a little about me. J I live on the west coast of Canada with my adorable (aka annoying) 5 year old boy/girl twins; my sweet yet sarcastic husband (who just said he’s not sarcastic at all, he’s ironic!); my counter-surfing puppy, Jasper, who turns one year old the same day HIGHLAND PROMISE debuts (Happy Birthday, baby!!); and my 86 year old dad who gets a look on his face every time it’s mentioned there are—gasp—sex scenes in my books…but then goes on to tell me young people (meaning me) did not invent sex.

Speaking of ears, as I’m writing this, I have ear plugs in because my son is beside me in my office (aka my bedroom) building a fort under the covers on the bed, while my Slytherin-declaring daughter waits to knock it down, which results in WW3; Jasper hovers at the edge, barking, until he can’t stand it anymore and jumps onto the bed with the monsters, er, I mean children; my husband comes in and says something “ironic” about the chaos; and I stare fiercely at my computer screen determined to ignore it ALL—and thanking God my dad can turn his hearing aids OFF.

Okay. Onto the important part: HIGHLAND PROMISE! I started writing HIGHLAND PROMISE almost 10 years ago after reading ALL of Julie Garwood’s medieval-set historicals, most of which were set in the Highlands. I LOVED them. I don’t read a lot of books over and over, but I did hers. I found them completely captivating.

I think HIGHLAND PROMISE captures that same tone and spirit: Caitlin MacInnes is the archetypal Waif/Free Spirit who turns the archetypal Chieftain, Laird Darach MacKenzie’s life upside down—and then spins it around and dribbles with it for a while. As Lachlan MacKay, Darach’s foster-brother, says of Darach’s and Caitlin’s courtship:

“I doona know when I’ve laughed so much as watching Darach trying to control [Caitlin] over the past few weeks. Her intentions are good, but she’s trouble. It follows her around like a faithful hound.”

Darach is undone by her. His heart, which he swore he’d NEVER give to another woman, is torn from his body and becomes putty in her hands. Of course, he doesn’t know that at first, and even when he finally figures it out, he doesn’t tell her—he’s a warrior, a leader of his people, not a poet. And Caitlin, who is determined to make Darach happy whether he wants her to or not, doesn’t believe there’s any possible way she can stay with him. She needs to leave the Highlands immediately and find her mother’s family in France.

’Cause there’s a whole lotta trouble on her tail (some might call it a shite storm—haha!) heading straight for Darach. But what Caitlin fails to realize is that Darach, along with his brothers and their clans, is strong enough to handle it.

War is coming. Caitlin didn’t start the blood feud between the Frasers and the MacKenzies, nay, Laird Fraser and his sister, Darach’s former betrothed, did that, but she will be the catalyst that ends it—pinning the good men of the Highlands against a monster.

(Well of course they win, and of course Darach and Caitlin live happily ever after—it’s a romance, after all!!)

Now go—before I start rambling and give too much away. Read the words and feel the feels. Fall in love with both Darach and Caitlin…and prepare yourself for Lachlan’s story next.