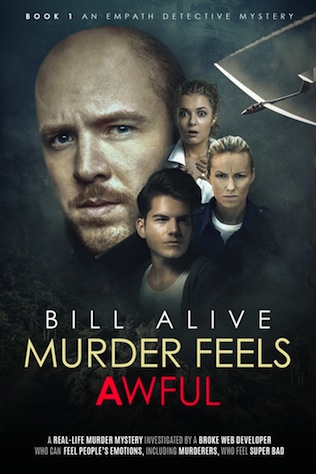 
He can feel people’s emotions. And murderers feel awful.
Mark Falcon can “vibe” other people’s emotions … and they’re usually super painful. So he hides out in rural Virginia, making websites for clients he never has to meet. It’s a not-terrible life, sort of … until he vibes the final panic of a woman’s murder.
The last thing hermit Mark wants to do is go out and investigate, vibing which suspect is seething with secret hate. Even with me along, his trusty new sidekick/housemate. (I’m so cheerful that I double as an emotional air freshener.)
But Mark has no choice. He has to act, because our local cop detective is convinced that there’s no killer and the woman killed herself. Unfortunately, our cop’s also got the overall presence of a Viking goddess, and the last thing she wants is some delusional “psychic” website guy playing amateur sleuth. (Not to mention hitting on her.)
With the cops threatening jail, small-town secrets threatening Mark’s sanity, and a crazy-gorgeous doctor suspect threatening my heart, time’s running out for Mark and I to catch the killer…
Before the killer catches us.
Murder Feels Awful is the very first Empath Detective novel, a new cozy mystery series that totally really happened, but is officially fiction. If you like Janet Evanovich, M. C. Beaton, Deb Baker, and long lists of famous author names, you’ll love this new series that has it all — amateur detectives you’ll love, zany small-town characters, sparkling wit, and a cold-blooded killer you’ll never even suspect.
Buy this hilarious cozy mystery today! Right now, even! Seriously, at this limited-time launch price of 99 cents, it’ll cost you more to lose time thinking about it than to click RIGHT NOW and jump in! Plus, there’s a whole extra mystery book waiting for you inside … for free…

GIVEAWAY!
Mark Falcon, the Empath Detective, may be able to sense people’s emotions, but the rest of us need a little help. If you win this giveaway, you’ll not only get paperback editions of all Mark’s detective adventures so far (including his prequel novella, ORIGIN STORY, which you can’t even BUY in print, because it’s only a gift ebook for my email list friends) … you’ll also get the technology to BE an empath yourself! I refer, of course, to … MOOD RINGS!
According to the happy Amazon reviews, this mood ring actually DOES CHANGE COLOR! (And does NOT turn your finger green! ) These are nice. Plus, you’ll get TWO rings … the possibilities are endless … you and your significant other could start to feel a whole new connection … or, alternatively, you could “gift” a ring to a particularly inscrutable colleague … or crush …
The rings will be available in size 7, 8, or 9 — just let me know which size you want for each of your two rings. Man, I wish I could enter this contest myself…