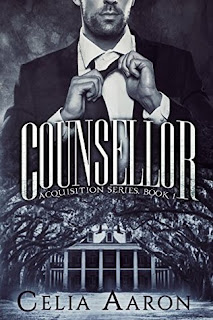 Synopsis:
In the heart of Louisiana, the most powerful people in the South live behind elegant gates, mossy trees, and pleasant masks. Once every ten years, the pretense falls away and a tournament is held to determine who will rule them. The Acquisition is a crucible for the Southern nobility, a love letter written to a time when barbarism was enshrined as law.
Now, Sinclair Vinemont is in the running to claim the prize. There is only one way to win, and he has the key to do it — Stella Rousseau, his Acquisition. To save her father, Stella has agreed to become Sinclair’s slave for one year. Though she is at the mercy of the cold, treacherous Vinemont, Stella will not go willingly into darkness.
As Sinclair and Stella battle against each other and the clock, only one thing is certain: The Acquisition always ends in blood.

“You are testing my patience, Stella.” He stopped and pushed me up against the wall. His eyes bored into me. “Don’t ask Farns questions like that. He can’t help you.”
“I can ask whatever the hell I want.” The cocktail of emotions roiling inside me had made me bold, even in the face of Vinemont’s wrath.
His gaze travelled over my face, down to my lips and then back to my eyes. “That’s where you’re wrong.”
He gripped my hair and pulled my head to the side. His mouth was at my ear again, his Southern drawl whispering darkly to me. “I thought I made it clear that I own you now. You do as I say. If you don’t, I’ll make sure your father feels the brunt of your punishment.”
He stepped into me, pressing my back into the wall and crushing me painfully. I yelped at the sudden aggression. He clapped his free hand over my mouth. I hit ineffectually at his sides, his back. I even tried to knee him, but he took advantage of my efforts and pushed one of his large thighs between my legs and lifted so I was straddling him.
“Fuck.” It was a gravelly whisper.
My heart beat faster and faster, panic welling up inside and drowning out any other emotion. He was going to hurt me. Right here, right now in this sunny hallway.
He pulled my hair harder and harder until I thought he would rip it out. I stopped struggling.
“Better. Here’s how this is going to go, Stella. You are going to stop trying to make trouble. You are going to do as you’re told. This year will pass by much easier for you if you just follow my orders. You can fight me.” His lips moved down to my neck, a hairsbreadth from making contact. “And I’m not going to lie, I like it when you fight. It makes this easier for me. But you won’t like the results.”
Goodreads
Purchase:
Amazon

AUTHOR BIO:
Hi, I'm Celia. Nice to meet you. Can you keep a secret?

I write smut. Gritty, dirty, delicious smut. This is a secret we can share. I'll do the writing. You do the reading. We have to keep our relationship quiet because I have a highly respectable day job. At night, I become markedly less respectable, as you will see.

Thanks for stopping by and I hope you enjoy my stories. And remember, it's our secret.

Sign up for my newsletter at aaronerotica.com to get information on new releases. (I would never spam you or sell your info, just send you book news and goodies sometimes). ;)