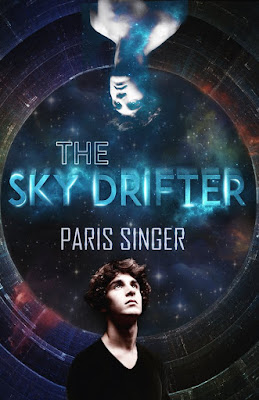 The Sky Drifterby Paris SingerRelease Date: August 27th 2015Summary from Goodreads:Wandering in the vastness of space, is the Sky Drifter; an academy reserved for the best students in the known universe. Seven is just such a student. Gifted in strategy and Sphere, he lives happily on-board with his friends Iris and Pi, taking on his rival, visiting planets for exploration and competition. Everything is the way he likes it, until he sees a mysterious girl in a red coat, who will reveal to him a secret that will bring everything he thought he knew crashing down around him.

About the Author
Paris Singer was born in Brussels, Belgium. He has lived in the U.K. and in various places in Spain, where he currently resides. At university, he studied English law and Spanish law. He didn't like it. He then studied translation and didn't like it, either. Currently, he is an English teacher in the south of Spain. He has far too many interests, he's told, a few of which being sports, playing his old guitar, learning Japanese, painting, reading and cooking. Not a day goes by, however, where he doesn't write something, be it under a palm tree or on a bench at a bus stop somewhere.

Tell us a little about yourself. Where were you raised? Where do you live now?I was born in Brussels, Belgium, but was raised in southern Spain. Right now I live in Australia, but who knows in future (though it’ll probably be Spain). Cats seem to accompany me wherever I go.
At what age did you realize your fascination with books? When did you start writing?In my early years the adults told me I had to read, so I didn’t and detested the very idea. As soon as it wasn’t a theme, I began reading anything I could. Then, my first creative writing assignment occurred in English class. The very thought of creating my own story, my own world…It blew my mind and adrenaline surged through my body.
Who are your favorite authors to read? What is your favorite genre to read. Who inspires you in your writings?My favourite writers I would say are Dean Koontz, Neil Gaiman, Oscar Wilde, Charles Dickens and Arthur Conan Doyle. But there are far more, I’m sure.
What is your writing process?
"I tend to stare into space until I can place myself inside the story.  From there, I'll try to describe what I see, smell and hear as much as I'm able to.  Like a fly on the wall, I guess."


What do you like to write and read about? Do you stick to a particular genre or do you like to explore different ones?
"Well, I don't really think of genre when I write.  I just think of stories I'd like to read, worlds I like seeing in my own mind.  These do, admittedly, tend to drift towards the dark side of fiction, however.  That said, many of my favorite authors do write paranormal, dark, horror, mystery books.  I guess it’s something I'm drawn to."


What is in store next?
"I have a paranormal thriller novel being released probably early next year called 'The Regulars', and I'm currently working on another dark fantasy novel, which I'm having fun with, despite its sinister moments.  After that I'll continue with a horror set in Victorian London."


SHE GRABBED SEVEN’S hand and pulled him hard in her direction. “This way!” she exclaimed to both of them as the persistent shrill of the alarm sounded about the dark steel corridors.
Seven’s mind was still spinning. He disbelievingly looked back at his double to make sure he was still there. How far away the academy now seemed.
The mysterious bright yellow-skinned girl who held his hand had opened his eyes to a world that seemed too cruel to be real. Yet there he was, and there she was, her long, dark green hair swaying behind her. Part of him still clung to the hope it was all nothing more than a dream. That any second now he would awake to the sound of Pi or Iris banging on the door t o his dormitory room, urging him to wake up lest they be late for class. Yet, the feel of her warm hand, the clanging of his boots on the cold metal underfoot, the stifling thin air he breathed, the sting of the cuts on his body and face, all felt real. A reality the likes of which he had never tasted before. This was the reality he had always been denied. A reality they had kept from him. A reality that wanted him dead.
The urgency of the situation still eluded him, for he had yet to see any attackers, and had only her word to cling to. The fact was, this new existence began and ended with her words, convincing as they were. His other self really was running behind him, and the mysterious girl’s desperation to escape seemed genuine. He trusted her, or wanted to. She could just as easily have left him there at the academy, and he would have been none the wiser, but she hadn’t. She had freed him. The truth had to be better than the perpetual lie he had inhabited.
They ran, weaving through flickering corridors, snaking past oily archways and doors. All of a sudden, any doubts he had vanished in a cry that sounded behind him. He turned as they stopped running to see his other self jerking violently, electric blue forks of light enveloping him. The horror of what Seven witnessed rocked him to his very core.
“We have to keep going!” shouted the mysterious girl, pulling at his arm once more. “Come on!”
Breath catching in his throat, Seven locked gazes with his duplicate, whose eyes shone as tears rolled down his cheeks, just before his body crashed limply to the ground beneath.
“Come on!” Like a rising echo, the mysterious girl’s voice shattered the veil that fogged his devastated mind, and he ran with her faster than he had before.
Seven now ran slightly ahead of the girl as she directed him toward a large doorway ahead. Upon crossing its threshold, he stopped, awed by the enormity of what was before him. He found himself standing on a long, narrow metallic bridge. Surrounding him was a tremendous, cylindrical area that extended up and down into pitch darkness as far as the eye could see. At the other end stood another doorway.
As he made to dash toward it, the bridge retracted into the dusty stone wall on the other side. Seven turned with haste, to make certain the mysterious, green-haired girl was behind him, ready to jump. Emerging from the depths beyond the doorway, she dragged herself to its threshold, clinging to her deeply slashed leg, dark blue blood gushing as she held it.
Panic coursed through Seven’s body. She looked at him, defeat and regret saturating her eyes. He was not going to lose her. She had released him from his prison. She had been his guide and saviour. She was his world.
“Jump!” he shouted, stretching out his hand, imploring her to take it.
He looked into her eyes, his mind ablaze with words he wanted to tell her. The girl whose name he didn’t even know had saved his life, had revealed the reasons and secrets behind his very existence, and he knew nothing about her. And now time was running out.